There are a couple of DIY ways to dislodge most kitchen sink clogs. First, pour boiling water down the drain. If that doesn’t do the trick, start working the clog with a cup plunger. If your plunger can’t manage, it’s time to clean the p-trap or try a plumber’s snake.

Kitchen sinks tend to clog more than most other sinks in a home. It only makes sense: you probably dump food waste down your kitchen sink’s drain regularly. Next time your kitchen sink clogs, try each of these DIY dislodging methods one by one. If one doesn’t work, move to the next until you’ve solved the problem. If none of them work, it’s time to call in the pros. Start from the top:

Before you follow this (or any of the following steps), remove everything in and around the clogged sink. Take out any dishes or utensils you were soaking and try to bail out as much standing water as possible. While you’re preparing the sink, fill a kettle or pot with water and start boiling it on your stovetop.

When the water is boiling, pour it into the sink’s drain. Be careful not to scald yourself or dump the water in too quickly–remember: it won’t drain as quickly as usual. If the water doesn’t dislodge your clog, let it sit in the sink until it cools. When the water has cooled to safe temperatures, remove it from the sink and try again. Repeat this process a few times. Boiling water can remove most of the gunk that clogs kitchen sinks quickly and effectively. 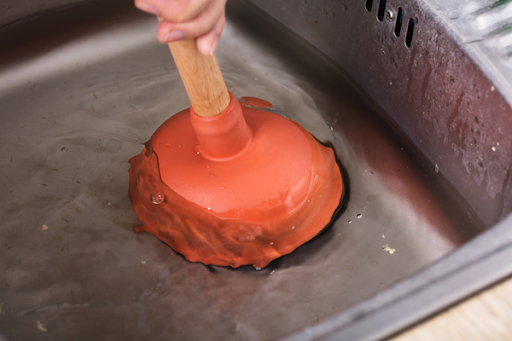 A cup plunger is the “classic” plunger you picture when you think of any plunger. It has a wooden or plastic handle and a rubber cup at one end. Before you use a cup plunger, fill the sink with hot (not boiling) water until you’ve submerged the plunger’s cup. This water will help create the suction you need to remove the clog.

Position the cup plunger over the sink’s drain hole until it creates an airtight seal covering the drain. If you have a double kitchen sink, then you should stuff something into the other sink’s drain hole. Work the plunger up and down over the drain at a constant and steady beat. Keep it up for about a minute or so, then release the seal. If the water drains, then you’ve dislodged the clog. If it doesn’t, repeat this process two or three more times.

First, boil some more water. Dump the boiling water down your drain along with a cup of baking soda. Let the baking soda and boiling water sit for a few minutes and heat up another cup of hot water. When the cup of water is hot enough, dump it down the drain with a cup of vinegar. After adding the vinegar, plug up the drain (be careful not to scald yourself).

Once combined, the vinegar and baking soda will chemically react with one another. That chemical reaction will generate pressure, fizz, and even a mild acid, which will all help break through clogs. For best results, we recommend alternating between using baking soda and vinegar and trying your plunger. Be careful not to use too much baking soda and vinegar or try plunging too many times, however. If your attempts to don’t work after several tries, move on or call the pros. 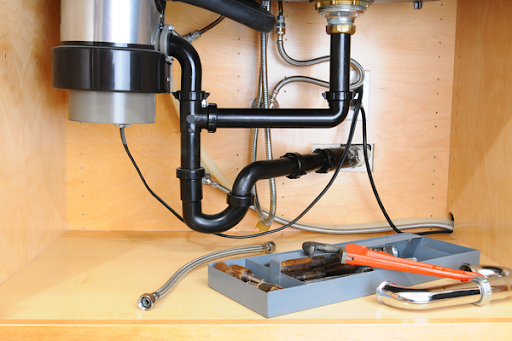 All sinks contain a p-trap between the basin’s drain and the wall drain. This (appropriately) p-shaped pipe is usually made of PVC or plastic, but it could also be metal. The p-trap keeps sewer gases from rising up and out of your drains. In order to do that, it has to bend into a p or u shape. This bend often catches objects that you accidentally flush down your drain. If you can’t seem to clear your clog, there may be something caught in your p-trap.

Removing a p-trap is easy, but you may need a crescent wrench, a bucket, and some gloves. Your p-trap beneath your sink. It is affixed to the sink drain and wall drain by two different fasteners. Place the bucket beneath the p-trap and begin unscrewing the fasteners. The p-trap will contain dirty water that may splash out while you’re removing it. When you’ve detached the p-trap, clean it out. When you’re finished, re-install the p-trap and test the sink.

If you’ve tried each of these steps and still can’t dislodge the clog, it’s time to call in the cavalry. While there are more… aggressive steps you could try, we don’t recommend them. The last thing you want to do is break something and create a big plumbing problem while you’re trying to fix a small one. Trust us…

Instead of losing your temper, we recommend you call in the pros at Ben Franklin. We can use augers, cameras, or even jets to remove any clog, no matter how stubborn. If you have a kitchen sink jam that’s driving you up the wall, call Ben Franklin. We’ll get things flowing again fast.