When you think of scary stories, you probably don’t think plumbing…but maybe you should! After all, there are few things scarier than losing your plumbing. Seriously! Plumbing is an essential part of the contemporary life we tend to take for granted. If something were to… happen to it, then society as we know it would collapse. There would be panic in the streets!

Still not convinced? Well, let’s see if we can change your mind. We’ve collected a few of the scariest plumbing stories we could dredge up from the sewers of history. These are just a few hair-raising, nose-plugging stories on why plumbing is an absolutely essential component of everyday life, and why going without it is too spooky to even consider. Get ready to feel a lot more grateful for your toilet!

In 1858, a particularly hot summer exacerbated a certain MAJOR problem the city of London had overlooked: its sewer system. Most of the waste produced by London’s three million people emptied from its sewers directly into the river Thames. So much waste floated on the surface and piled on the shores of the Thames that scientist Michael Faraday observed: “the whole river was for the time a real sewer”.

The prevailing medical theory of the time suggested that cholera spread via inhalation of contaminated sewer air. Londoners didn’t just think the smell was intolerable; they thought it posed a direct danger to their lives! This wasn’t strictly true (contaminated water, not air, spreads cholera), but we should be glad for their mistake. London city officials found themselves facing significant public pressure, and so they commissioned civil engineer Joseph Bazalgette to solve their problem. Bazalgette’s design was so efficient that it’s considered one of the engineering marvels of the industrial world and still serves as the foundation of London’s sewer system. It also helped save the lives of thousands of Londoners, made the contemporary size of London possible, and defeated the Great Stink once and for all. Or… did it? 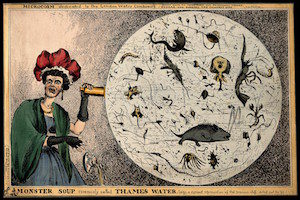 If ever there was a story to convince you of the importance of proper plumbing repair, it would be the tragedy of the SS Sultana. The worst maritime disaster in US history occurred on April 27 1865, 18 days after the end of the Civil War. The Sultana was one of many boats commissioned to transport Northern POWs from Vicksburg, Mississippi to Cairo, Illinois. Vicksburg Quartermaster Reuben Hatch approached the Sultana’s Captain, J. Cass Mason, with a deal: Hatch would allow Mason to take 1,400 POWs (far more than was safe) aboard the Sultana. In exchange, Mason would split the government’s $5-per-man commission with him.

On-route to Vicksburg, one of the Sultana’s boilers began to leak. Repairing the leak correctly would involve an extensive repair that would take days. Afraid of losing out on his deal with Hatch, Mason had the leak hastily patched up instead. When the Sultana departed a day later, there were over 2,000 people aboard. Two days into their voyage, the Sultana’s overburdened, leaking boiler exploded. An estimated 1,100-1,900 people died in the ensuing shipwreck. Mason went down with his ship, but Hatch never answer for his crimes–likely because of his political connections. Gotta love a happy ending… 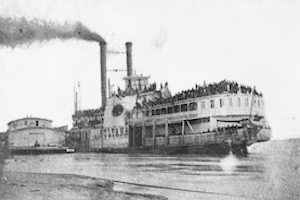 Nothing convinces us of the vital importance of modern plumbing quite like cholera does. Cholera is one of the deadliest diseases in human history. Researchers estimate that there are 1.3 to 4 million cases of cholera worldwide every year, and 21,000 to 143,000 cholera-related deaths. Starting in 1817, a series of seven devastating cholera epidemics saw the disease spread throughout the inhabited world. Tens of millions of people died during these epidemics. And it all started with dirty water.

Cholera is transmitted by coming into contact with food or water that has been contaminated by the fecal bacteria Vibrio cholerae. Every time cholera breaks out, it’s because of inadequate water sanitation facilities. In 1854, British physician John Snow (no relation) was able to successfully identify contaminated water as the primary transmitter of cholera. His findings were instrumental in controlling the spread of the disease, and in demonstrating the importance of quality plumbing sanitation. Today, municipal sewer and drinking water facilities can successfully filter out V. cholerae bacteria and prevent the spread of cholera. The disease continues to be a major concern for countries without adequate water sanitation resources such as Kenya and Yemen. 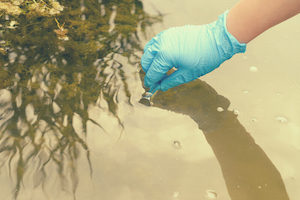 Developing the technology and discipline of plumbing is one of the most important ways we have improved society throughout history. Having clean water and a reliable means to process waste is a huge part of what got us this far. We don’t even like to think about what it would mean if we were forced to suddenly go without our plumbing. Ghosts and goblins have nothing on that!

Luckily, you’ll never have to fear being without plumbing, because you have us. The next time you’re having a plumbing problem, just call Benjamin Franklin Plumbing® of Dallas. We’ll swoop in like the hero at the end of the monster stories to save you from your stinky nightmare. Happy Halloween!